It is 1777, and England’s second-greatest portrait artist, Thomas Gainsborough, has a thriving practice a stone’s thrown from London’s royal palaces, while the press talks up his rivalry with Sir Joshua Reynolds, the pedantic theoretician who is the top dog of British portraiture.

Fonder of the low life than high society, Gainsborough loathes pandering to grand sitters, but he changes his tune when he is commissioned to paint King George III and his large family. In their final, most bitter competition, who will be chosen as court painter, Tom or Sir Joshua?

Meanwhile, two and a half centuries later, a badly damaged painting turns up on a downmarket antiques TV show being filmed in Suffolk. Could the monstrosity really be, as its eccentric owner claims, a Gainsborough? If so, who is the sitter? And why does he have donkey’s ears?

Mixing ancient and modern as he did in his acclaimed debut The Hopkins Conundrum, Simon Edge takes aim at fakery and pretension in this highly original celebration of one of our greatest artists.

I’m writing this review, about to sit and watch Fake or Fortune, which tonight, happens to be about a lost Gainsborough – talk about perfect timing! As a fan of the programme, I thoroughly enjoyed the mystery at the heart of the modern timeline here, as well as the glimpses into the workings of a successful painter, in the historic story.

We have three perspectives here – Gainsborough himself, Gemma and her antiques show, and David, a member of staff in the Gainsborough household. All three were great reading, and it says something not to have a ‘weak link’ in terms of keeping the interest going in all three elements. There are elements of comedy and drama alike in each tale, and the pace is kept up throughout, so you just have to keep turning those pages.

The art world isn’t one I know anything about, but don’t think you need to know your Gainsboroughs to enjoy reading this – there’s plenty of history and explanation, but set out in an easily digestible manner. I’d highly recommend this one, and am intrigued by the author’s previous title too, as I believe it’s along the same lines. 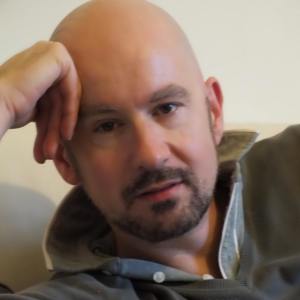 Simon Edge was born in Chester and read philosophy at Cambridge University.

He was editor of the pioneering London paper Capital Gay before becoming a gossip columnist on the Evening Standard and then a feature writer on the Daily Express, where he was also a theatre critic for many years.

He has an MA in Creative Writing from City University, London. His first novel, The Hopkins Conundrum, was longlisted for the Waverton Good Read Award. He lives in Suffolk.

Read more about Simon and his work at www.simon-edge.com.

*Terms and Conditions –UK entries welcome.  Please enter using the Rafflecopter box below.  The winner will be selected at random via Rafflecopter from all valid entries and will be notified by Twitter and/or email. If no response is received within 7 days then Rachel’s Random Resources reserves the right to select an alternative winner. Open to all entrants aged 18 or over.  Any personal data given as part of the competition entry is used for this purpose only and will not be shared with third parties, with the exception of the winners’ information. This will passed to the giveaway organiser and used only for fulfilment of the prize, after which time Rachel’s Random Resources will delete the data.  I am not responsible for despatch or delivery of the prize.