The King’s Anatomist: The Journey of Andreas Vesalius
by Ron Blumenfeld

A revolutionary anatomist, a memory-laden journey, and a shocking discovery.

n 1565 Brussels, the reclusive mathematician Jan van den Bossche receives shattering news that his lifelong friend, the renowned and controversial anatomist Andreas Vesalius, has died on the Greek island of Zante returning from a pilgrimage to the Holy Land. Jan decides to journey to his friend’s grave to offer his last goodbye.

Jan’s sentimental and arduous journey to Greece with his assistant Marcus is marked by shared memories, recalled letters, and inner dialogues with Andreas, all devices to shed light on Andreas’ development as a scientist, physician, and anatomist. But the journey also gradually uncovers a dark side of Andreas even as Jan yearns for the widow of Vesalius, Anne.

When Jan and Marcus finally arrive on Zante, the story takes a major twist as a disturbing mystery unfolds. Jan and Marcus are forced to take a drastic and risky measure that leads to a shocking discovery. On his return home, Jan learns that Andreas was an unknowing pawn in a standoff between King Philip of Spain, his employer, and Venice. When he arrives home in Brussels, he must finally reckon with his feelings for Anne.

A debut novel by Ron Blumenfeld, The King’s Anatomist is a fascinating medical history blended eloquently with meaningful relationships and a riveting mystery. Set within a pivotal time in European history, the story carries readers through some of the most important medical discoveries while engaging them in a deeply personal story of growing older and confronting relationships. A fictional masterpiece with real and relevant historical sources, The King’s Anatomist is as enlightening as it is enjoyable.

Besançon was just stirring when we rode out on the Ornans road toward a rosy glow in the eastern sky. The air was fresh and clean, and Nature, waking to the season, had painted the hills with pale grass and dabs of purple and white crocus. Along with a distant herd of sheep being driven to grazing fields, we would make the gentle climb into the foothills of the Jura Mountains lying beyond Ornans. With luck we would be out of our saddles in a few hours.

If every day of travel could be like this, I thought, I would dare to see more of this world. My mood was further buoyed by the prospect of reuniting with Antoine. Marcus, a devout Catholic, was awestruck that he would be face to face with a Cardinal.

“I am not sure I will be able to speak.”

“Don’t worry. Antoine will be pleased to finally meet you. In private he is anything but formal, but you should call him ‘Your Eminence.’”

Marcus smiled. “I did not become a Catholic yesterday.”

Two hours into the ride, the road ahead disappeared over a gentle rise.

“We should see Ornans from there,” I said.

Marcus urged his horse ahead with the pack horse in tow to get the first look, but when he reached the top he pulled up so suddenly that his horse reared.

He settled his horse and turned to answer. His face, rosy-cheeked moments before, was ashen.

I put my heels into my horse’s flanks, and when I joined him I saw why his mood had changed so quickly. Under the same brilliant morning sky that lifted my spirits, dead and dying men were scattered like stones across the downslope. A mile beyond sat Ornans, tidy and serene beside the River Loue, unruffled by the carnage on its doorstep.

We sat speechless, our horses stirring nervously under us.

“It will not take long to pass through the battlefield,” Marcus said in a hush.

We rode into an eerie tableau that belied the mayhem that created it. The fighting must have been within a day’s time; the corpses had not yet begun to bloat or smell. Besides our horses’ hooves, the only sound was the jarring cries of crows, swooping down to feed on bodies that had already been laid open by sword or shot. People from nearby villages hastily picked through the gruesome leavings, some working in pairs stripping the dead men of their clothes. A few women wandered anxiously among the corpses, stopping here and there in dread of finding a missing husband or son. Men still clinging to life begged for help with arms outstretched.

The dead had assumed different positions where they fell: contorted grotesquely or stretched out in repose as if they had napped through the battle; collapsed upright on their knees or plunged forward, like sleeping babies, with their faces on the ground and their knees tucked under them.

The death blows varied in how they landed: a single, neat stab wound or a gaping slash; a severed leg or a slit throat; a smashed skull or a jagged crater dug by arquebus fire. A hail of canister shot could kill a solitary man or tear through a group, leaving them heaped lifeless upon one another. I was overcome with a voyeur’s shame, unable to look away from these dead men as I rode by them, the very shame I felt watching Ernst Bronck hanged in front of his wife and children.

Halfway down the hill we passed a standard-bearer, barely in his teen years, terror frozen on his face and a hole in his chest the size of a dinner plate. Beside him was the banner that he carried to his death bearing the crest of the Huguenot prince Louis of Condé—a blue shield with three fleurs-de-lis below a golden crown. The dead soldiers following the boy’s banner must have mounted an ill-conceived uphill charge into a fusillade of cannon. Most of the dead, like him, wore civilian clothes. The victors, judging from the few left on the field, bore the bright colors of the Swiss army.

What an appalling folly, to die that way in the name of Martin Luther or Pope Pius.

At last we rode past the last corpse. Thanks to Andreas I have seen enough to ride through this battlefield without puking.

This was but a skirmish compared to the battles you’ve seen. You wrote me how you could hear the battle cries from the field hospital, and smell the gunpowder. How you worked through the pandemonium, the ground underfoot sticky from blood, deciding who you would try to save and who you would leave to die. How you poured hot oil into artillery wounds, and amputated stacks of limbs.

You longed for your cadavers, didn’t you—who did not bleed, or scream in pain, or grab your sleeve and beg for a quick death. You wrote with a workaday attitude, but it was much worse than that, wasn’t it?

“A historical novel with a twist. An old friend of the most famous of all anatomists, Andreas Vesalius, sets out to solve the mystery of his death on a Greek island. What he finds involves a tangle of acquaintances going back to their Brussels childhood and earlier dissections. This lively story combines fine historical detail with a sensitive feel for past personalities.” – VIVIAN NUTTON, HON FRCP, EMERITUS PROFESSOR OF THE HISTORY OF MEDICINE, UNIVERSITY COLLEGE LONDON

“With The King’s Anatomist, Ron Blumenfeld has successfully crafted a story from disparate elements. Descriptions of Renaissance sciences, emerging European cities, and the pre-industrial countryside are intertwined with love gained and lost and the mystery of the death of Andreas Vesalius, the father of modern anatomy. The result is a plot of rich tapestry that leaves the reader panting for the next page, the next vignette along a journey from Brussels to the Greek Island of Zante and along another journey; that from childhood friendship to the grave. As with much fine literature, I was sorry to reach the last page.” – MAYNARD PAUL MAIDMAN, PROFESSOR EMERITUS OF HISTORY, YORK UNIVERSITY, CANADA

‘Centered on the mysterious death of the great anatomist Andreas Vesalius, this enjoyable tale is anchored by scholarly literature. The device of a first-person account by an observant but hesitant “best friend” allows for vivid recreation of the many remarkable moments in the anatomist’s life. Relying solidly on social and political history, it convincingly evokes the atmosphere of sixteenth-century Europe. The surprising but plausible ending will surely encourage readers to learn more.” – JACALYN DUFFIN, MD, PHD, PROFESSOR EMERITA, HANNAH CHAIR OF THE HISTORY OF MEDICINE, QUEEN’S UNIVERSITY, CANADA 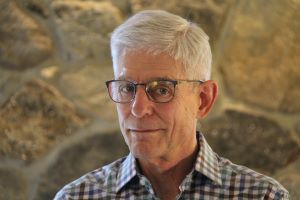 Ron Blumenfeld is a retired pediatrician and health care executive. Ron grew up in the Bronx, New York in the shadow of Yankee Stadium and studied at City College of New York before receiving his MD degree from the SUNY Downstate Health Sciences Center. After completing his pediatrics residency at the University of Arizona, he and his family settled in Connecticut, but Tucson remains their second home. Upon retirement, he became a columnist for his town’s newspaper, a pleasure he surrendered to concentrate on his debut novel, The King’s Anatomist (October 12, 2021). Ron’s love of books springs from his childhood years spent in an antiquarian book store in Manhattan, where his mother was the only employee. He enjoys a variety of outdoor sports and hiking. He and his wife Selina currently reside in Connecticut and are fortunate to have their son Daniel and granddaughter Gracelynn nearby.

Wednesday, October 13
Excerpt at What Is That Book About

Thursday, October 14
Review at Booking with Janelle
Review at With a Book in Our Hands

Tuesday, October 19
Review at Across the Sky in Stars

Monday, October 25
Review at Up Past My Bedtime

Tuesday, October 26
Excerpt at Reading is My Remedy

Friday, November 5
Review at Coffee and Ink
Review at Bookoholiccafe

Enter to win a paperback copy of The King’s Anatomist by Ron Blumenfeld.

The giveaway is open to the US only and ends on November 5th. You must be 18 or older to enter. 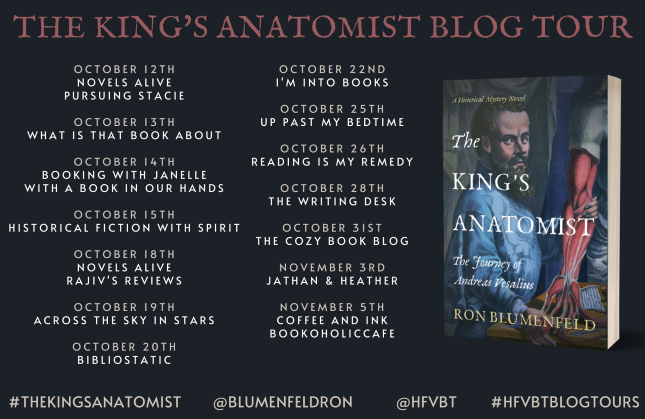