I’ve always had a bit of a thing about knights. You may have noticed. It’s been going on for a while, and a few years ago, at an event at Tynemouth Priory, I spent almost an hour chatting to one of the winning combat team (Northern Knights, hurrah!), so much so that I decided to get myself a more formal interview with one. A couple of emails later, and Chris Jackson, of Historia Normannis, kindly took the time to answer my questions, and tell me all about the group, and his experiences within it. So here we are then, my interview with a knight. Enjoy! 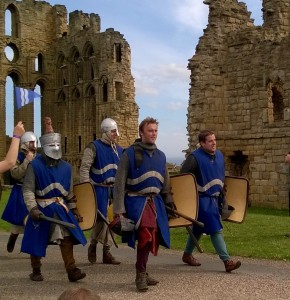 What made you want to join Historia Normannis? Have you always been keen on history?

I always joke that I was in a vulnerable place when my friend got me caught up in it all. He actually caught me when I’d just got my last job, I’d gone from working basically only weekends to now working an actual 9-5 job and my weekends were entirely free and somehow I’d lost touch with all of my hobbies so the weekends were very boring. So he grabbed me, gave me the spiel, and made me promise to turn up to the first training session that he was running at Keele Uni. So I did, I thoroughly enjoyed it and continued to turn up. History-wise I’ve always had an interest but it’s always been a passing interest – until recently of course.

Can you tell me a bit about the joining process, and what sort of ‘roles’ people can be involved with?

Joining is as simple as turning up and just having fun. (if you go to here: http://www.normannis.co.uk/wp/?page_id=7138 you can get in contact with the admin team and they can tell you where your closest group is). Everyone starts off as a levy – your “basic” peasant, this isn’t the same as a serf which we do NOT portray because well we like our members… So everyone starts off as a levy and over the years they can rank up depending on what they do, basically the more you’re willing to do and actually do the higher rank you can get (and the more responsibility you get) but obviously you only go as high as you want and only do as much as you want. It is a hobby after all.

What’s the most random / interesting thing you’ve learned since being a member?

Most random: I honestly can’t really say, it’s probably the little bits of trivia that you pick up about the different places that you go.

Interesting has to be that a lot of Knights that came back from the Crusades, at least according to the records that we have, probably had PTSD. Obviously it went undiagnosed and even wasn’t considered a “thing” until WW1.

Have you visited a lot of historical sites as a member? Which has been your favourite, if so?

I’ve visited more castle in the last year than I had before joining Normannis. My favourite by far has to be Pendennis – mostly due to the company and some of the stories that we have from that show. But there’s nothing really better than getting up in the morning and being on a cliff over looking the sea.

Does visiting historical places ‘in role’ change your perspective of them at all?

There are sadly very few 12th century castle left or at least left as they would have been in the 12th C. However that still doesn’t stop us from walking around them in our gear, it really does throw you back in time when you do that and I’d honestly suggest it as a great way to get a in touch with the UK’s history.

If you could introduce just one modern luxury, what would it be, an why?

We joke about this one a lot. The answer comes down to rubber/elastic. For those that don’t know before elastic was a thing underwear had to be large enough to accommodate your longest stride. This means that the brais (underwear) that we wear are often 2-3 times wider than our waist, in some you can fit two people in them. What we’d like is to have modern underwear (which admittedly we do wear because braise do break and we’d rather not flash members of the public). However the Normans were really into their calves – it was basically the modern equivalent of abs – you had to have the biggest calves, the most defined calves and the tightest hosen (imagine long socks up to mid-thigh which you tuck your underwear into). So if we gave the Normans elastic they’d probably made something like spandex and just have really tight hosen…

Having watched Clash of Knights at Tynemouth, and felt a genuine rush at it all, how does it feel going into ‘battle’?

Clash of Knights is just like any other contact sport. You get an adrenaline spike as you walk on the pitch you start fidgeting and then everything goes slow as it all kicks off. Going into battle is actually less “scary” I know I can rely on the people beside me I’ve trained with them and I’ve fought against them. I know what they can and can’t do and it’s almost relaxing. Battles have a rough pattern that they follow – the lines meet, they fight a little, they retreat, they hit each other again, rinse repeat until finally the levies on one side decided actually they don’t want to be there because their buddy is dead/crying in pain/otherwise incapacitated and actually they’re straight up not paid to be there. So “battles” are a lot less nerve racking than Clash in my honest opinion.

The knights involved certainly looked fit to drop at the end of the day – how hard is it?

It is physically exhausting. My personal set of maille weighs 20kgs. That adds another 1/4 of my bodyweight, this doesn’t include all the other bits we wear like the shields and helmets. Some of us are physically fitter than others but it still takes it’s toll. Every muscle in your body has to do that little bit more work which at the time doesn’t seem that much, but it’s like walking up a slight incline; you might not notice now but on your way down you realise how much more effect it took you. You truly get an appreciation of how fit Knights had to be. It should be noted though it’s not the same kind of fitness, we wouldn’t expect a Knight to be able to run a marathon, they probably couldn’t run more than 5-10km, but god help you if you were only 200m away and they really felt that your head didn’t deserve to be on your shoulders and more. At the end of the day we sleep very well and that includes that fact that many of us are sleeping on sheep skins and roll mats.

What does your family think about it? I worried about the knights, and I didn’t know anybody, do they worry about you? Or are they involved as well?

No my family isn’t involved. They’ve not actually seen me take part in Clash – although they have seen videos and photos of our events. They’ve seen some of our larger battles but nothing that would actually make them fear for my safety all that much. My family has a habit of picking up dangerous hobbies – I’m pretty sure we’re all competing to see who can get the most dangerous. However my family does think it’s great fun and enjoys some of the stories I have and seeing and handling all my weapons and armour. Anyone who said they never wanted to wield a sword or be a knight is a liar or had a terrible childhood – so weapons often get passed around at family events. I think there comes a point where you just have to stop worrying about someone’s safety – at least actively worrying  – and I think my family hit that point a while back, they know I’m not going to do anything really stupid without actually looking into it so they assume that I’ll probably be ok. After all only a couple years ago I had to run a test that I had hoped never to try and see if the myth about pushing teeth back into place once they’d been knocked out would let them heal properly – the answer is yes it does – but I think they’re significantly less worried about me considering I do actually wear armour for this hobby…

Thanks for your time, Chris!

One thought on “An interview with a knight”