Have you been following the Ocelot Press Blog Hop? Last week, Tom got to have his say, over on Sue Barnard’s blog, and today, right here, I get to interview Brennus, from Bran Reborn, by Nancy Jardine, which I recently reviewed as part of Nancy’s blog tour.

Looking forward to hearing from you, Bran…

What did you think when Lorcan arrived at Garrigill with Nara, and when he announced his grand plan?

That’s an interesting question! Like the rest of my fellow warriors at Garrigill any female newcomer arouses some interest and I confess I found Nara to be a lust worthy woman. I had no knowledge of her background, apart from her being an enemy Selgovae, but there was a huge amount of curiosity due to my brother Lorcan having the audacity in bringing her into our Brigante hillfort. The Selgovae have been our traditional enemies for time immemorial, so it was even more riveting that Lorcan brought a Selgovae female warrior to my father so soon after the death of our eldest brother Arian, at the hands of marauding Selgovae warriors.

I was appalled when Lorcan’s ultimate plan was revealed, to use Nara as a pawn in a political game – albeit an official marriage bargain. Nara had no say in the matter and it was much worse when I met the weasel who called himself father to Nara. I just knew that Nara could not be traded off in marriage to just anybody!

We know what happened to you at Whorl, but how did you feel, leading up to the battle, and about to face the Romans in such large numbers?

The prospect of engaging in a pitched battle against the Roman Legions was one that I relished, along with most of my fellow Brigante warriors. The notion that the Roman Empire sought to subdue all Brigantes with their gladius was one that no warrior-trained man from Garrigill could thole, or contemplate. Like other northern Brigantes, I had heard of our southern Celtic brothers being forced to knuckle down under the Roman thumb, so going to battle gave me no fear.

As tribal champion, I knew my own skills with sword and shield were unsurpassed but what I had no true idea of was the way that the Roman hordes presented themselves in battle. We Brigantes fight man- to-man. Small groups of Romans cower under a shell of shields and attack at the sound of a whistle or one man’s voice. How could I know that? Or even how invincible those legionaries were?

It must have been terrifying when you first realised you were in the care of a stranger; how did you relax under her care, as you seemed to develop an incredibly close bond by the end?

Close to old Meaghan? I suppose we became close, of a kind. When the mist of her herbal potions eventually ceased, and left me feeling more clear-headed, what infuriated me was that the old crone had tied me down to the cot! You talk of relaxing? That never happened. How could it when I felt she had made me live and condemned me to being only half a man. She forced me to take stock of myself, badgered me to think forwards and not backwards. It took many weeks before my temper subsided, and by the time I accepted my new state poor old Meaghan had given me her all. When she died I was ashamed because I had never allowed her to see how important she had become and I never thanked her properly for giving me a new life.

It must have been challenging, realising that 1) Ineda was right, and that 2) trading with your enemies made perfect sense – how did you reconcile those facts?

Ineda was relentless, in a different way from her grandmother Meaghan, of course, but they both shared a similar temperament. Did you know that Ineda means ‘bright fire’? She was exactly that! When she came with her ideas of trading with the Roman scum I immediately wanted to douse that inspired fire within her. I had not come to any conclusions as to how I could get myself near those Roman fort walls so she made me jealous of her ingenuity but also terrified for her safety. However, I could see she was going to try out her idea with someone else, like that immature stripling Madeg, so I relented. Naturally, we made a good team because Ineda is not just fiery by nature; she is bright in competence, her reasoning powers unsurpassed.

As an aside here, you can find out more about Bran’s adventures, and read what others are saying about the book, through the recent blog tour: 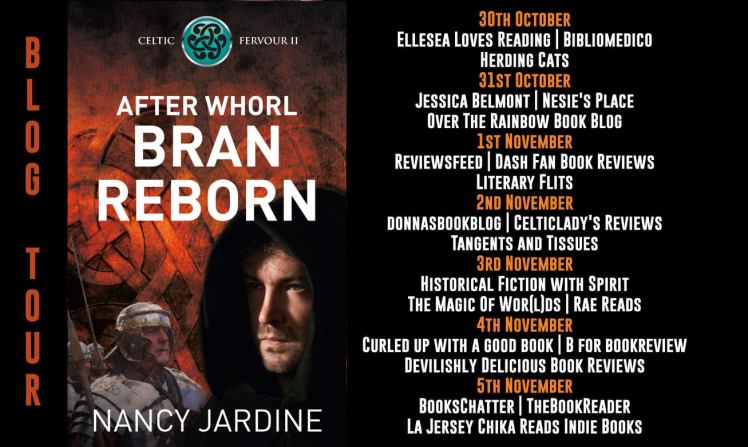 You maintain a sense of privacy at Witton, and during your work as a messenger; was there a moment you really wished you could reveal your true identity, and be Brennus again, rather than Bran?

I wished that so many times, but I knew it was not to be. When I learned that I was regarded dead at Garrigill, and that Nara had married Lorcan, I was devastated. I had not been in love with Nara but I knew Lorcan was and she with him. Her betrothal to me was to ensure that she had someone to look after her as befits a princess of her tribe. That she had married Lorcan was not the real issue. It is because my brother is the most honourable man that I know. Had I returned to Garrigill, I would have put him in an impossible position. He would have felt duty bound to honour the treaty he had made with Nara’s father. Knowing my brother, as I do, he would have made sure that Nara became my official hearth-wife back at her home hillfort of Tarras at the expense of his own happiness.

Do you miss your family? How do you think they would feel, to see you again?

Coming from a large family with many siblings how could I not miss them? My father Tully was already ailing when I went to battle. And after that bloody confrontation, it was heartrending to not know if my father still lived, or if my brothers had returned from battle. Before the devastation at Whorl, I had a place and my own duties at Garrigill which I miss more than I can say – though by now the Roman invaders will probably have destroyed what Garrigill was. Since they believe me dead returning to Garrigill would shock them, though I would hope they would understand why I have had to remain at a distance.

Can you give us any inkling where your next mission is going to be taking you, and that we can look forward to reading about?

Though Ineda is lost to me, I will never forget her. The ring that perpetually dangles at my chest is matched by the love I will always bear for her in my heart. I have learned that my life has already been separated into different phases and I can see that I am now to embark on a new one soon. While King Venutius needs my expertise as a spy, I will continue to thwart the Roman usurpers. My task will be to travel more, to venture northwards to territories as yet untouched by Roman invaders. And perhaps, in time, I may find some contentment even if not real love with another woman.

For this week only, the Kindle edition of After Whorl: Bran Reborn is on special offer at just 99p.And Nancy is also offering a prize of a free ebook copy of The Beltane Choice (the first book in the Celtic Fervour Saga series), or if you’ve read that one already, you can choose an ebook from her other novels.

To be in with a chance of winning, click on the link above to go to the book’s Amazon page, click on “Look Inside”, and find the answer to the following question:

Lorcan of Garrigill is out to avenge the death of his older brother. What was his brother’s name?

Nancy Jardine writes historical fiction; time-travel historical adventure; contemporary mystery thrillers; and romantic comedy. She lives in Aberdeenshire, Scotland, where life is never quiet or boring since she regularly child minds her young grandchildren who happen to be her next-door neighbours. Her garden is often creatively managed by them, though she does all the work! Her husband is a fantastic purveyor of coffee and tea…excellent food and wine! (Restorative, of course)

A member of the Historical Novel Society; Scottish Association of Writers; Federation of Writers Scotland; Romantic Novelists’ Association and the Independent Alliance of Authors, her work has achieved finalist status in UK competitions.