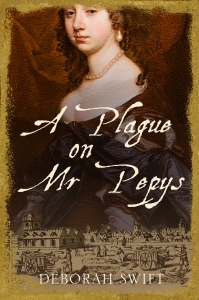 The second novel in the series based on the different women in Samuel Pepys’s famous diary.

Sometimes the pursuit of money costs too much…

Ambitious Bess Bagwell is determined that her carpenter husband, Will, should make a name for himself in the Navy shipyards. To further his career, she schemes for him to meet Samuel Pepys, diarist, friend of the King and an important man in the Navy.

But Pepys has his own motive for cultivating the attractive Bess, and it’s certainly not to benefit her husband. Bess soon finds she is caught in a trap of her own making.
As the summer heat rises, the Great Plague has London in its grip. Red crosses mark the doors, wealthy citizens flee and only the poor remain to face the march of death.

With pestilence rife in the city, all trade ceases.

With no work as a carpenter, Will is forced to invest in his unscrupulous cousin Jack’s dubious ‘cure’ for the pestilence which horrifies Bess and leaves them deeper in debt.

Now they are desperate for money and the dreaded disease is moving ever closer. Will Mr Pepys honour his promises or break them? And will they be able to heal the divide that threatens to tear their marriage apart?

‘Here’s the address,’ Bess said, pressing the paper down on the table in front of her husband. She patted him on the shoulder, which released a puff of dust. Will was a fine figure of a man – tall and blond, with arms muscled from lifting timber, and the fine-boned hands of a craftsman, but his clothes were always full of sawdust and wood-shavings.

He turned and smiled, with an expression that said he was ready to humour her.

‘It’s on the other side of the Thames, close to one of the shipyards. Big houses all round. A nice neighbourhood. Quiet.’

‘Where?’ Will asked, standing to pick up the paper, and stooping from habit because their attic room was so low.

‘Deptford.’ She held her breath.

‘Deptford?’ he said, throwing it back down. ‘We’re not living in Deptford.’

‘Oh, Will, it has to stop sometime. He won’t even know we’re there.’

‘You don’t know my father, he gets to know everyone’s business.’

‘That’s no reason. That terrible brimstone preacher lives just round the corner, and we manage well enough to avoid him.’

‘We need never see your father. The Deptford yard is enormous. More than a mile end to end. Just think, you could work there fitting out ships, and you’d never set eyes on him.’ She tugged at his sleeve. ‘The workshop’s so fine – you should see the workbench. More than eight foot long, and it runs right under the window. You can nearly see the whole shipyard from there.’ She paused; she knew his weak spot well. ‘And the house will be perfect for your new commission. You won’t have to hire a work place again.’

‘You’ll get better commissions though, once people see Hertford’s chairs. You should see it! There’s room for your lathes and there’s already a wall with hooks for hanging tools. Just come and look, Will. That’s all.’

In the panelled chambers of Thavie’s Inn, Holborn, Will Bagwell lifted the quill and dipped it in the ink. His heart was pounding beneath the buttons of his doublet. The paper before him was thick vellum, as if to emphasise the serious nature of the agreement. Ten years’ of his wages in a good year. An enormous loan. He wanted to read it again, for it was a lot of writing to take in, in a language that took some fathoming. But they were all waiting.

Behind him, he could hear Bess breathing; feel the heat of her hand on his shoulder. He tapped the nib on the edge of the bottle to shake off the excess droplets of ink; Bess’s hand tightened. He swallowed. Just shy of sixty pounds. If he signed this, there would be no going back.

He hesitated, and looked up. Opposite him, the turtle-faced goldsmith, Kite, nodded and narrowed his eyes in a tight smile of encouragement. The notary, an official from the Inn of Chancery in a blindingly white cravat, was impatient, shifting from foot to foot. No doubt he’d seen such an agreement many times.

A deep breath. Will felt the nib touch the paper and suddenly, there it was – his signature flowing across the page. He had no sooner lifted the pen from the document than it was swiped out from under his gaze, and Kite the money-lender was scribbling his name under Will’s. Immediately, a serving boy came with a stub of smoking sealing wax, and even before Kite had time to press the metal die into the red puddle on the paper, the notary was adding his witness signature.

It was over in a few seconds and Will’s damp palm was gripped momentarily in Kite’s wrinkled one, before the duplicate loan agreement and the house deeds were thrust into his hand for him to sign.

‘My man Bastable will collect the repayments on the last day of each month,’ Kite said.

Will felt dazed. He wanted to turn back time, give the agreement back. But they were all smiling, Bess most of all. Her face lit up the room. She had her fine house now, and he couldn’t let her down, could he? But all he could think of was the feeling of his empty purse, like a lung with the breath squeezed out of it.

Check out book 1 in the series!

‘Swift is a consummate historical novelist, basing her books on immaculate research and then filling the gaps between real events and real people with eloquent storytelling, atmospheric scene setting and imaginative plot lines’ The Visitor

Other than knowing he was a major diarist of his time, I know virtually nothing about Samuel Pepys, or even much about the world he lived in, so I found this fascinating as a historical account, as much as a piece of fiction. I really engaged and sympathised with both Bess and Will, and the situation they find themselves in; to read about the lower classes during this time is hard-going at times, and the descriptions are brilliantly researched.

It’s rare that I actually hate a fictional character, and feel gutted every time they appear on the page, but Will’s cousin Jack is a monster in this tale. Conflict and tension build up and up throughout the novel, as Bess and Will get themselves deeper and deeper in debt and tanglement. Although it’s frustrating to read some of the decisions the characters make, given the circumstances, quite often, there’s no other option to people in their world.

I really enjoyed this book, and reading the historical notes at the end of the book was fascinating, to see what (and who) was real, and what had been fictional. This is definitely a series I’m going to be looking at again, to enjoy, as well as learn more.

I write historical fiction, a genre I love. I loved the Victorian classics such as Jane Eyre, Lorna Doone and Wuthering Heights. As I child I loved to read and when I had read my own library books, I used to borrow my mother’s library copies of Anya Seton and Daphne du Maurier. I have loved reading historical novels ever since; though I’m a bookaholic and I read widely – contemporary and classic fiction as well as historicals.

In the past I used to work as a set and costume designer for theatre and TV, so I enjoy the research aspect of creating historical fiction, something I loved doing as a scenographer. Each book takes about six months of research before I am ready to begin writing. More details of my research and writing process can be found on my website. I like to write about extraordinary characters set against the background of real historical events.

I live in North Lancashire on the edge of the Lake District, an area made famous by the Romantic Poets such as Wordsworth and Coleridge.

I took an MA in Creative Writing in 2007 and now teach classes and courses in writing, and offer editorial advice from my home. A Plague on Mr Pepys is my ninth published novel.