Handsome young chef Zach Docherty is feeling the heat. Following an exposé in a national newspaper, his fiancée Poppy Dunlop has broken their engagement. Heartbroken at the thought of life without Poppy, Zach drowns his sorrows and, when his agent suggests that Zach becomes a contestant in a reality TV show, Jungle Survival, he reluctantly agrees. Plunged deep in the jungle, into a bizarre mix of talent and trials, Zach meets glamour model Cleo Petra, and the cameras go crazy. Will Zach survive and be crowned Jungle King? Or will his latest exploits push Poppy further away… 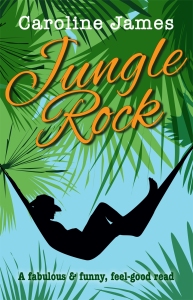 Celebrity Chef and TV game show contestant, Zach, appears to be struggling in the Jungle…

“Would you believe it?” Hattie was aghast. “He’s only bleedin’ raised his hand before the first grub has even landed!” She sat with Jo and stared in horror as Mac the Medic led Zach out of his Perspex box. “Even that lass who’s full of silicone has lasted longer.”

“I think Zach’s doing it on purpose.” Jo’s eyes were glued to the screen.

“Well, he’s making a right tit of himself if you ask me,” Hattie said. “Calls himself the Gypsy Chef?” She folded her arms and shook her head. “He hasn’t won one trial yet.”

“Oh dear, look at Lenny.” Jo winced as she watched the rotund little con-man splutter and stagger away from his box. His hair was full of slime and meal worms. “He didn’t last long.”

“You’ve got to hand it to old Cleopatra, she’d made of stern stuff.” Hattie studied the model who seemed determined to battle it out. Slime, fish guts and what seemed like thousands of wriggling grubs oozed over Cleo’s chest.

Ava counted the clock down and as it struck time, she announced that both Rod and Cleo had won and would be leaving camp to join the others at Happy Valley, where a hearty meal awaited them.

“He’ll be on the next plane home.” Hattie was cross. She watched Zach and Lenny walk out of shot as they made their way back to camp, heads downcast at the prospect of another hungry night ahead.

“They’ll be in Happy Valley soon, I’m sure it’s not as bad as it seems,” Jo replied. She frowned as she watched her beloved son. He seemed to be losing weight and Jo felt sure that his hip bones hadn’t stuck our quite so much when he’d arrived in the jungle.

“Or his hotel,” Hattie said. “Once they start voting, the public will want to see a hero not a has-been.”

“I think you need to give him a chance,” Jo said, but in truth she wondered if Hattie was right. The Gypsy Chef had yet to prove himself, and even though Jo felt sure that Zach had deliberately held back on the tasks to send others through, she doubted that the public would see it that way.

“Well, all this worrying has made me thirsty,” Hattie said. “Fancy a snake bite?” She headed over to a glass-fronted cupboard where Jo kept a range of liqueurs.

“Let’s hope he has a better day tomorrow.” Jo studied the strange-looking concoction Hattie held out.

“To Wonder Boy,” Hattie said and, raising her glass, downed her drink. “Let’s hope he succeeds in his jungle journey!”

“If you’re looking for a highly entertaining story, look no further.”

“Fans of ‘I’m A Celebrity Get Me Out of Here’ will love this book!”

Sign up to Caroline James’ mailing list to be entered into a draw to win a £20 Amazon voucher.  Giveaway open internationally and closes 30th November 2017. Winner will be announced by Caroline via email.

Caroline James has owned and run businesses encompassing all aspects of the hospitality industry – a subject that features in her novels. She is based in the UK and spends her time writing, climbing mountains and running a consultancy business. Caroline has a great fondness for the Caribbean and escapes to the islands whenever she can. She is a public speaker, reviewer and food writer and loves cooking and baking, especially cake. Her next novel, The Best Boomerville Hotel is coming soon…