Hello! This week we’re crossing the Atlantic (well, I suppose that depends where you’re reading this – I’m crossing it, at any rate), to join Joy Norstrom on a trip around Kananaskis Country.

Thanks, Jennifer, for inviting me on this addition of Sunday Sojourns. Strap on your jet-packs folks, we are going to explore the endless forests, rushing waters and magnificent eastern slopes of the Rocky Mountains. This region is known as Kananaskis Country. Look for me on Morley Flats. I’ll be waiting for you by this sign:

We are now standing in traditional Ĩyãħé Nakoda (Stoney) Territory, Treat 7 land in Alberta, Canada. Ĩyãħé Nakoda referred to this area as Ozada, meaning: where the rivers meet. Siksika, Blood and Kootenai First Nations also have connections to this region. To hear how to greet someone in Ĩyãħé Nakoda check out this great link.

You’ll notice the air is fairly crisp. It’s autumn now, or as I think of it: the short season before the cold blows the moisture out of my skin. See those peaks? That’s the Rocky Mountains. If you follow the highway behind us, you’ll reach Banff National Park in less than thirty minutes. Unfortunately we won’t be soaking in the Banff Hot Springs today, but I highly recommend you take a detour after our tour. Instead we will spend our sojourn retracing Gillian Campbell’s journey in OUT OF PLAY.

Have you heard of Kananaskis before? Kin-e-a-kis was a Cree warrior who lived about one hundred fifty years ago. He sustained an axe injury to the head, in what was reportedly a fight to attract the attention of a woman. Amazingly, he lived. But Gillian was probably not thinking much about Kin-e-a-kis’s miraculous recovery or his love-interest as she zoomed past Mount Baldy in her purple car. Her thoughts were scurrying with nervous energy. Why? She was about to put her stagnating marriage to the ultimate test by participating in her husband’s hobby, Live Action Role-Play, or Larp.

Larp involves dressing up as a medieval or fantastical creature and acting out scenes and battles. This was not Gillian’s idea of a fun way to spend the weekend.

Focused on her impending situation, Gillian was unlikely to take in the cleared ski trails on Mount Allen or to consider the coming year’s snow conditions at Nakiska Ski Resort. Nakiska was the location for alpine events during the 1988 Winter Olympics, and is now a popular ski destination for city dwellers in neighbouring Calgary.

As a late-bloomer-skier, I learned to ski at Nakiska alongside my children. Its icy, groomed trails hold a special place in my heart. And so does Andrew, my seventy-year-old ski instructor whom I happened to plough over with my inept ski abilities…but that’s another story. 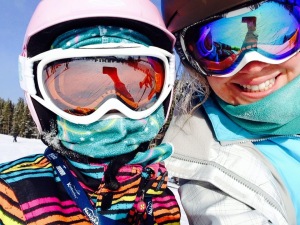 With much trepidation, Gillian parked her car, and made her way into the campsite that had been set-up for the larp weekend ahead.

Walking down a treed path, Gillian was assaulted by bittersweet memories of hiking with her husband. She was also assaulted by a band of elves. To find out how Gillian manages, check out her story in OUT OF PLAY which launches October 27th. You are also most welcome to join me for the online launch.

Take care, Jennifer and all you jet-pack Sunday Sojourn travelers. I hope you enjoyed your visit to Kananaskis.

Joy Norstrom is the author of Out Of Play, a women’s fiction novel long on humour and short on romance. She enjoys hiking with family, wine with friends and reading late into the wee hours when she should be asleep.

You can connect with Joy on social media via: